There are days when a trip out seems daunting at first, even the mere mention of a location fills you with trepidation, it seems too far, the journey may be tiring and stressful etc … If you’re not careful you can reach that point where you’ve talked yourself out of it and yet ironically later you regret your decision to stay home. It’s almost like a catch twenty-two situation, you go and you may hate it, or at least the journey, you stay and you’ll hate that you wasted a day sat on the couch just watching TV.

So on days like these I try to beat that inner demon that’s feeding me with doubt and impending doom, and simply jump out of bed and go; before any negative thoughts have chance to take a hold. Inevitably you find that once you’ve started the journey, your expectations of road works, delays and global disasters fade away and the fun side takes over. One thing my wife and I find fun, is a road trip. Yeah, it could just be twenty minutes down the road, it could be eight hours to the top end of the country, but 99% of the time, it’s entertaining. Put on a bit of music, make a few jokes about passing drivers and place names, you have yourself a more than interesting journey ahead.

The subject of the day was, Blenheim Palace, a place we’d both wanted to go to for a long time now, but somehow just hadn’t got round to it; you know how it is, you have a list, but it tends to just grow rather than shrink, because there’s always something that comes up to stop you from ticking off rather than adding to. Being awful at Geography in school, my sense of location and distance aren’t the greatest, so I instantly assumed it would be hours away, when in fact it’s a lot closer than I expected. The trip down was fairly relaxed, nothing my awesome partner in crime sat next to me couldn’t handle, she’s a genius with Google Maps and an iPhone. Turning in to the road, or mighty long driveway, depending on how you look at it, we were greeted with an amazing view of the house off in the distance. It was one of those moments when you know you made the right decision, staying home just wasn’t an option when you saw the splendour of the palace and its grounds. As we’re both English Heritage members we automatically got a 30% discount on parking and entry, which made it a great price for the two of us and is definitely worth mentioning on arrival if you’re also a member. You may be asked about converting your entry fee into an Annual Pass, seems confusing at first, but basically you come out of it with an annual pass which enables free access to the palace, park and gardens over the course of a year, as well as free or discounted entry to a number of events. Worth the conversion if you’re going to be a regular visitor.

For those who may be asking, is anyone famous linked to Blenheim Palace? You won’t be disappointed. The palace is the main residence of the Dukes of Marlborough, the construction of the house was started in 1705 for the first Duke of Marlborough, John Churchill, as a reward for his military triumphs against the French and Bavarians in the War of the Spanish Succession. For the keen-eyed of you, yes, we’re talking the Churchill family, including British Prime Minister Sir Winston Churchill, born at Blenheim Palace on 30th November 1874. So there is a great deal of history behind the palace or house, I say this as Blenheim Palace is the only non-royal, non-episcopal country house in England to hold the title of ‘palace’.

We’d turned up just as it was opening, on a normal week day, and even then there were a couple of coaches waiting to offload their passengers, plus a school party. That said, due to the size of the grounds and palace itself, you didn’t really notice the number of people there, and sometimes it felt like a private showing, so get there early if you can; by the time we left the whole car park was full and at least another five coaches had turned up. The palace is in two sections, unless you’ve already booked a guided tour, you have the choice of going to the right, through authentically preserved rooms at your own pace, or to the left, where you’ll be taken on an automated tour through rooms with a whole bunch of multimedia and well designed sets that give you an idea of the history, right from the early days of construction. Both are certainly worth taking, we decided the right first, just to give us more time and end with the automated tour. I’d say the only downside of doing it that way was you come out of the palace and in to the gardens if you don’t go back on yourself. This meant we had to walk back in the main entrance for a second time to go around the multimedia section. 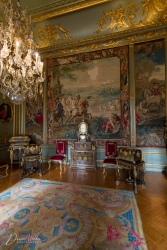 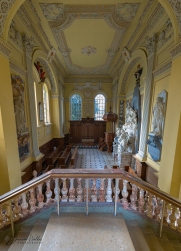 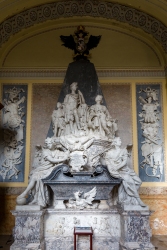 The gardens and grounds were wonderful, only marred by the sudden drop in temperature and grey clouds that had appeared during our walk around the palace. I tried a few shots out in the expanse of the grounds, but to be honest, the dull grey sky simply didn’t look great paired with the foreground of the lakes and woodlands. However, before the bad weather set in, the palace and immediate surrounding gardens came out quite well and with a wide-angle lens, you got a good idea of the size of the place. 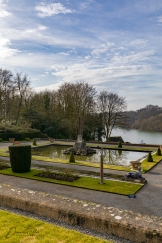 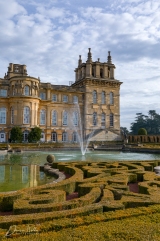 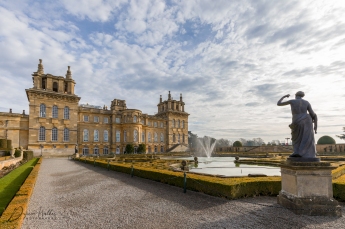 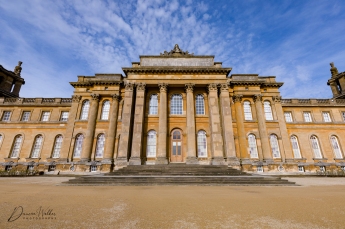 Blenheim Palace is certainly a place to visit, even on a cold and grey day, you’ll find interesting views, fun and friendly staff and come away feeling like you’d got your moneys worth. For the photographers out there, most definitely bring some form of wide-angle lens, you’ll regret it if you don’t as the scale of the place simply warrants that kind of coverage. Inside the palace you’re looking at a fast, maybe prime lens as most of the windows have blinds down to protect the paintings and collections from the harsh heat of the sun. If you’re shooting in RAW you’ll be fine, but I found that a lot of the internal shots were very warm on the white balance side of things, mainly because of the blinds and the lighting used. A few tweaks in Lightroom helped with the overall look, but you may want to look out for that if you’re not shooting RAW. A number of rooms are quite dimly lit or dark due to the construction of the building, and flash is not allowed, also you can’t do a long exposure as tripods are not permitted inside either; so get out your fast prime, open it up and juggle with that ISO setting for best results.